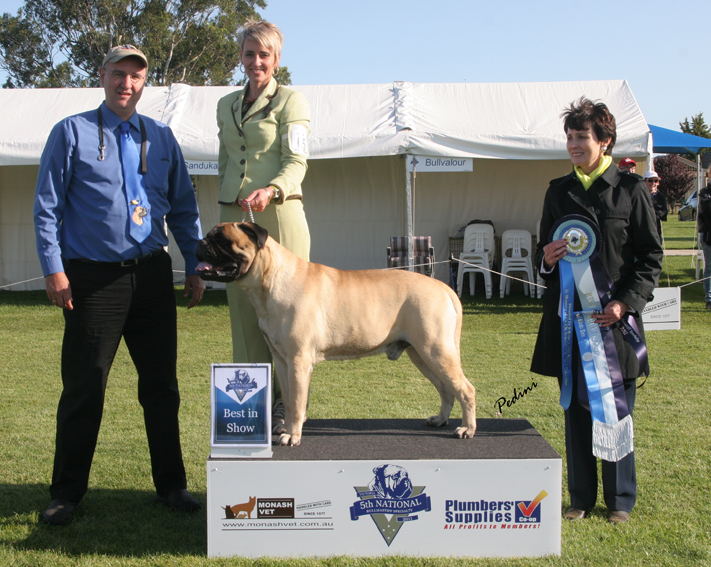 And then there was Ace….. a truly special boy, a dog that comes along once in a lifetime. There is just so much I could say about him. They say you shouldn’t play favourites with your “kids”, but Ace is the “golden child”. Or as Andrew refers to him “your bloody dog” when he ignores him and then obeys me instantly.  We have a very special bond.

We knew we wanted to keep a boy from our second litter and as soon as he was born, there was just something about him. I kept comparing all the other boys to him and it was a toss up between Ace and another boy, but I kept going back to Ace. The clincher was when we took them out of the garage into the puppy run for the first time. Andrew opened the door and called “pup, pup, pup” and 9 little heads came to the door but only one stepped straight out as confident as anything, and into the backyard. That was Ace and from that moment on I knew he was a keeper.

We have had such fun with him on this journey, he never chewed anything (except when girls were in season, hide your shoes!), never stole anything or buried it, was so laid back and loved everyone including our 9 year old male bullmastiff Caesar, they were best buddies. Ace actually gave Caesar a new lease on life and it was great watching them run around the yard chasing the cows together and sleeping on the same bed.

We soon found out that Ace loved the show ring and if people clapped and cheered he immediately thought he had done something fabulous to deserve it and so his show career began…… The more he won, the more he loved it and he soon figured out the more treats he got! Ace got his Australian title at 14 months of age and as he got older he started getting looked at for groups and I thought “I wonder if he could be a Grand Champion like his dad?” It wasn’t until he was a junior that judges started to look at him for Best in Group, but as soon as he hit intermediate class there was no stopping him. The points started to accumulate rather quickly (almost 500 in 2005) and I started seriously thinking I could get him to his Grand.

The day he got his Grand Title and Best in Show was just huge. Everyone around the group 6 ring knew if we won the group we had it and the buzz was amazing. I could feel Andrew’s eyes on me the whole way round the ring, my heart was beating so fast and my hands were shaking and we got it! We won the group! You experience so many emotions, pure joy, excitement and pride. It was such an awesome day and going on to win our first BEST IN SHOW was more than we could have hoped for and capped off a remarkable experience for us. What a buzz!

Another super achievement was Ace winning Bullmastiff of The Year in Queensland for an unprecedented 6 consecutive years! Something we are very proud of.

There have been more Best in Shows, more big wins but Ace gives us the most joy at home every day. He is such a gentle giant, loves other dogs, including playing with the puppies much smaller than him. He particularly loves going to obedience training. I’m sure he thinks dog school is his own personal harem, as he gets so excited, even now if I take him for fun occasionally. He loves to get out and about and mingle with all the other dogs. He loves kids and people in general, but he will still do his job if required.

Ace was shown sparingly in 2010 and 2011, concentrating on the Bullmastiff Specialty Shows and keeping him fit and ready for the National Bullmastiff Specialty in October 2011. In the run up to the National, he won 2 Best in Shows & 2 Runner Up Best in Shows, he was on such a roll. He just loves to show and spend that special time with me, he will do anything for me and gives his all when I ask for it. With retirement beckoning after the National, Ace’s form couldn’t be better and we were very excited as we headed off to Melbourne. I was hoping for the fairytale ending to his stellar show career. 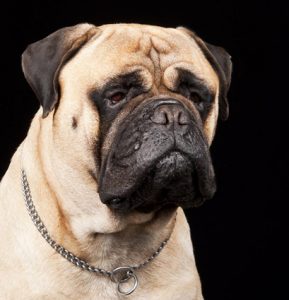 At the National, he won Open Dog Class and I was thrilled and relieved. For the Challenge Dog lineup I was so nervous I thought I was going to pass out! Then he won and I was so happy. Every time Ace set foot in the ring he owned it and got better and better with each round, he knew something big was happening. Then we had to wait for all the bitches to be judged before the Best In Show run off. I took Ace away from all the excitement and just spent 10 minutes alone with him, patting and talking to him, before geeing him up for what was ahead. Surprisingly, I was completely calm and focused on what we had to do and just wanted to enjoy our big moment. When we entered the ring, Ace heard the applause and just took off! Strutting his stuff, he didn’t put a foot wrong. I couldn’t have asked him to perform any better, it was the show of his life. And he won Best in Show! Whoo hoo! Ace jumped up on me as we collected our rosette and had a big smile on his face. He knew he had done well. What a wonderful experience and a fitting end to retire on. The judge couldn’t believe he was almost 8 years old, he floated round the ring like a dog half his age.

Now that Ace is retired, he spends most of his time with me on the lounge or on our bed when Andrew is away for work. He is never far from me and is a constant source of comfort and amusement to our whole family. Ace has seen us through some very difficult times, he is very spoilt, but I think he has earned it.

In 2012 Ace returned briefly to the showring with the introduction of the Supreme Champion title. It was as if he never left. At age 8 1/2 years, he collected a Runner Up Best in Group on his way to clinching the title. Ace is the first Bullmastiff to achieve this prestigious title, a just reward for a dog that has done so much.

Ace is truly a great ambassador for this wonderful breed, a true gentleman, a gentle giant. Special from the minute he was born, he will be special every day of his life. There are not enough words to express what he means to us. There will never be another Ace and we are forever grateful for having him in our lives.

Ace has progeny not only here in Australia, but in Sweden, Canada and New Zealand. His legacy lives on and we look to the new generations.

Such a special dog, such a special bond we had. Ace lived to 10 & 1/2 years old and was the four legged love of my life. We miss him everyday, forever in our hearts. 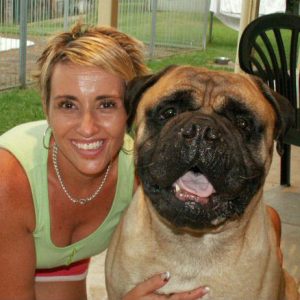 At various Specialty Shows
in 3 states,
Ace is also the winner  of