Hello there and welcome to the website of Anmenta Bullmastiffs

We live in the lovely Northern Rivers region of NSW not far from Byron Bay. We settled on our kennel name using the Latin word Aminta, meaning protector, as a base, but changing it slightly, AN for Andrew and ME for Melissa, Anmenta.

We have both loved and owned dogs all our lives, many crossbreds and a few purebreds, all pets, we had never shown or bred them before. And then that all changed when I saw my first Bullmastiff in 1994, I was in love!

We were living in Melbourne at the time and I was walking my Pug X Foxy, Cleo in the park and there was this little man walking a giant pug! I couldn’t believe it! I spoke to the man at length and promptly went home and told Andrew I had found our next dog! A Bullmastiff! I bought a book and did a bit of research on the breed, but as were in rented accommodation and only in Melbourne for a short time, we had to wait for my Bullmastiff.

A year later we moved to Orange NSW and as Andrew travelled a lot, I decided to make enquiries about getting a Bullmastiff, not only as a pet, but as a guard dog. There weren’t many breeders back then and there was a year long waiting list for a puppy, so we waited. Then I spotted an ad in the paper for puppies for sale in Sydney. Andrew was away at the time, so I rang him and said I wanted to go and have a look, he said I could look, but not buy one without him seeing the puppies. Famous last words!

I went, I looked, I fell in love and so in June 1995 I bought home Caesar. He was a wonderful dog, superb temperament, excellent guard dog and got along famously with little Cleo and all other dogs. Coming from a “backyard breeder”, he had numerous health problems so we had him desexed. We always refer to him as “the million dollar dog” as we spent a fortune on him, but we loved him so much and he was definitely worth it.

In 1998 we added another Bullmastiff to our household, her name was Cairo. Another lovely, sweet natured girl. We started showing her after meeting another Bullmastiff breeder in Orange, and so it began. We enjoyed the days out with like-minded doggy people, and the dogs had fun too.

In 1999 we all moved to Lismore, and unfortunately we weren’t here long when Cairo passed away suddenly. It was a very upsetting time as she was so young. But we were addicted now, and after a few months grieving, we started making enquiries with reputable breeders for our next one.

Our foundation bitch, Juno, Aust. Ch. Boadicea Just You Bet arrived in August 2000.  Juno did very well in the show ring and we established our kennel prefix in 2001, already anticipating our first litter.

After a lot of research and looking at potential suitors we settled on a lovely brindle male from Victoria, Aust. Ch. Blackslate Boston Blend (Imported USA). We had been showing quite a bit in both NSW and QLD and realised that there were no brindles being shown, despite them being the original colour. We loved the brindles and the idea of having something no one else had, held great appeal. So in June 2002, our first litter was born, 12 puppies, 2 were stillborn, 10 alive. 5 boys, 5 girls, 6 brindles, 3 fawns and 1 red! We kept a brindle male, Zulu, Australian Champion Anmenta Chaka Zulu, and a brindle female, Winnie, Australian Champion Anmenta Zulu Queen, as Cleo had died, aged 14, before the puppies were born.

We had some success showing the brindles but it was a hard slog as lots of judges had never seen the brindle colour before, but we persevered. It was still a lot of fun, because these were puppies we had bred, under our own prefix and we thought they were pretty special. Then we started looking into who would be the sire of Juno’s second litter and it was no contest. 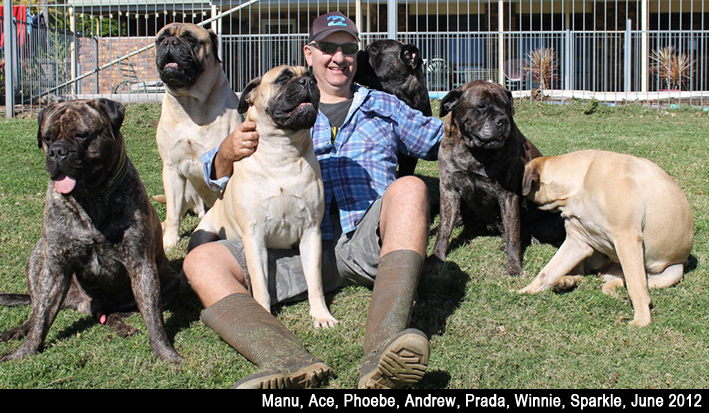 Despite Caesar’s health problems, he lived to the ripe old age of 11 ½ years. We had to have him put to sleep in October 2006. He is the reason we continue to own, breed and show these magnificent animals.

More litters have followed, and our family has grown. BEWARE!! You can’t stop at just one! They are loveable, stubborn, funny, exasperating and we wouldn’t have it any other way!

Striving for quality, our dogs are pets and wonderful companions first, show dogs second. The joy they give us on a daily basis far outweighs their achievements in the ring.