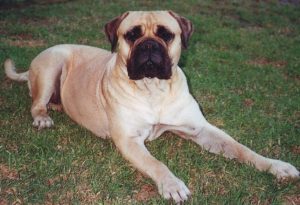 Juno was our foundation bitch. She came to us in August 2000, a bouncing bundle of joy full of mischief. We were so excited when we picked her up and couldn’t wait to get back into showing again. She pretty much moved in and took over!

She was a lovely fawn girl, compact and chunky with  a lovely feminine head. Juno was not a lover of the showring and was shown sparingly, but she racked up some very good results. She won her first bitch challenge aged 8 months, beating 5 other bitches much older than her. She loved the car trip to and from the shows and didn’t want to be left behind. Once she became a mum, the show ring was the last place she wanted to be, so we concentrated on her progeny. Although she still loved to sleep in the dogtrailer. Quite often she would go missing and after searching for her for an hour we would find her curled up in the trailer sound asleep. The only thing that would get her out was food. Gosh how she loved her food!

She was a brilliant mum. Even when our cows gave birth she would sit down by the fence as close as she could get to the new calf and whine at it. She wouldn’t leave the yard even to go on her usual walk, only food would get her away. She quite often had phantom pregnancies as a result, to the point of being laden with milk and trying to get though the fence to the calves as if to help look after them. If any of the other dogs came over to where she was, she would charge down the fence chasing the cows and tell the other dogs off, but as soon as she was alone with them again she would actually lick there noses through the fence and sit there looking longingly at them.

Even when she was pregnant nothing stopped her. The morning before she whelped her first litter, she still wanted to go for a walk, despite us living on top of a hill with a very steep driveway. When we got back, she ate a whole chicken carcass and 3 hours later started having puppies!

Juno only had 2 litters, having to be desexed at 4 1/2 years old. Out of the 19 puppies in those 2 litters, 6 went on to become Australian Champions, with 1 going on to become  multiple Best in Show winner and Supreme Grand Champion Anmenta Blonde Ambition. 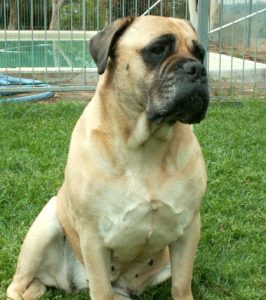 Juno aged very well, and hardly ever had anything wrong with her. Even in her old age she still moved very well and had very few grey hairs. She made a short venture back into the show ring at the Bullmastiff Club of NSW Championship Show in September 2007 wining Best Neuter in Show at 7 1/2 years old, beating dogs less than half her age! The judge couldn’t believe she was that old!

Sadly, we made the difficult decision to have Juno put to sleep on the 3rd September 2010, leaving a huge hole in our hearts. Whilst she was still physically fit and healthy, her mind was not what it used to be and she suffered from doggy dementia.

We are grateful and thankful for those beautiful puppies that she has produced for us, and the strong foundation she has started for our kennel. Her legacy continues to live on.

Mother to 6 Australian Champions and a Supreme Grand Champion.

Great Grandmother to the next generation of Anmenta progeny, her spirit lives on in all of them.

She’s sleeping peacefully now and hasn’t a care in the world. Sleep well baby, you will never be forgotten.